The following table lists the limits on the supported CCN resources. For limits on other Virtual Private Cloud (VPC) products, see Quota Limit. 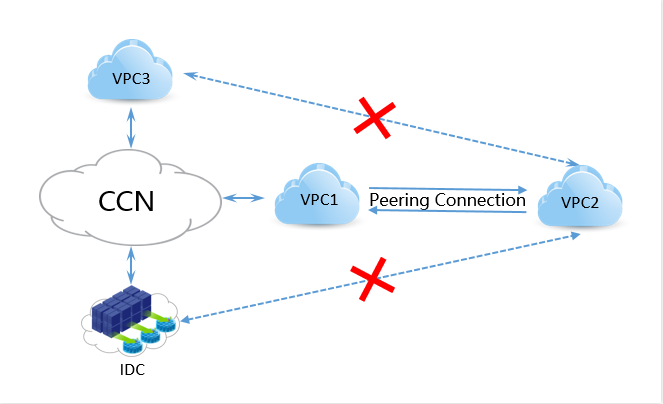 CCN restricts CIDR blocks at the subnet level: two subnets with identical CIDR blocks in different VPCs cannot interconnect (see below for route validity rules); accordingly, even if the CIDR blocks of two VPCs overlap, as long as their subnets have different CIDR blocks, you can still add them to CCN for interconnection.

If the CIDR blocks of multiple network instances have an inclusive conflict, only the route of the network instance that is first associated with the CCN instance will take effect. However, you can enable invalid routes in the route table, which, once enabled, will forward data based on the longest mask matching rule.

Example of an inclusive conflict

However, you can enable this invalid route in the CCN route table, which can forward data according to the longest mask matching rule. If the destination IP address of the routing policy is 10.0.1.0/24, the data will be forwarded to subnet B in VPC2 based on the rule.