Push notification is a critical way to reach users in the development and operation of mobile applications. Push notification can build up interactions with users and increase product usage.

TPNS console is web-based and very convenient. You can manage push messages, view push data, and test push notifications. You can send messages and monitor data in real time with some simple configurations.

TPNS offers comprehensive device-specific and backend APIs to help you customize push-related business logic, so you can achieve advanced functionalities such as personalized targeting. 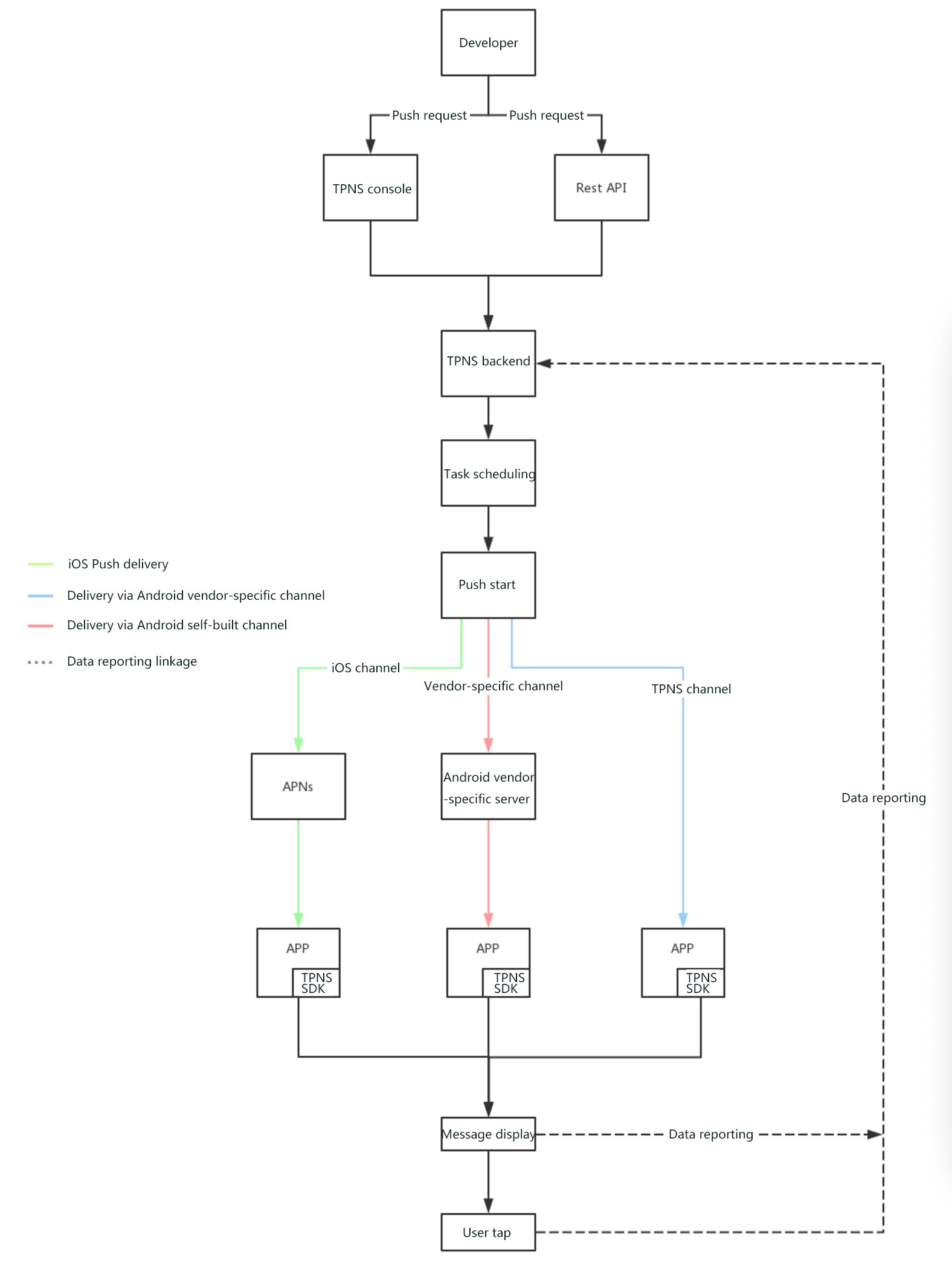 This section defines some basic concepts in TPNS. This section helps you better understand TPNS and other documents.

In-app message
This refers to the message directly passed through to the Android device, which will not be actively displayed in the notification bar and will be handled by the app after received.

APNs
APNs is short for Apple Push Notification service, the push channel in iOS. All iOS push messages are sent to the device via APNs.

Android TPNS channel
This is TPNS' self-built push channel, which maintains the connection between the device and the TPNS server through a unique sharing channel mechanism to ensure delivery of the push message.

FCM channel
FCM is short for Firebase Cloud Messaging, a Google push service and channel with push capabilities at the operating system level outside mainland China.

TPNS multi-channel integration
TPNS can intelligently select the push channel based on different use cases. It selects the best channel according to device types to ensure effective message delivery.

TPNS console
This is TPNS' visual push management interface, where you can send push messages, query push history, analyze data, develop and test pushes. It can be used after you log in on TPNS' official website.

REST API
This refers to the backend API provided by TPNS, which implements functions such as message push, device mapping management, and data querying. It makes it easier for you to customize pushes and is compatible with your existing business logic. For details, see TPNS Backend REST API.

Mobile SDK
TPNS provides a push SDK for both iOS and Android. The SDK is mainly used to display push messages and collect statistics. In addition, the SDK comes with a set of APIs that can help you achieve the business logic of targeted push. For details, see Android SDK API or iOS SDK API.

Push_Token
Push_Token is an identifier of a device generated by TPNS (hereinafter referred to as Token) used to push messages to the device, which is the smallest unit of push.

Device push registration
The push registration of a device indicates that a persistent connection has been successfully established between the device and the TPNS server. The device will communicate with the server.... (professional description is required here)

Account
This is a concept used in targeted push, which may be called alias in other push systems. Accounts can be configured and managed in the device SDK and TPNS backend. After an account is bound, it can be used as the push target to push messages.

Tag
This is another concept used in targeted push. You can call the TPNS SDK and backend API to bind one or more tags to the device. After that, you can push messages based on the tags, which makes lean operations easier.