The processes for joining groups of different types are described as follows:

Scenario 1: users can join and quit the group freely

Meeting groups (Meeting) and audio-video groups (AVChatRoom) can be used for interactive scenarios where users join and exit groups frequently, such as online conferencing and show live streaming. The group joining procedure is therefore the simplest.

Scenario 2: users must be invited to join the group

Resembling WeChat and WeCom groups, work groups (Work) are suitable for communication in work environments. The interaction pattern is designed to disable proactive group joining and only allows users to be invited to join the group by group members.

A group member calls inviteUserToGroup to invite a user to group, then all group members (including the inviter) receive the onMemberInvited callback.

Scenario 3: users join the group after requests are approved

Public groups (Public) are similar to the interest groups and tribes in QQ. Any user can request to join the group, but will not become a member of the group until the request is approved by the group owner or admin. While approval is required by default, the group owner or admin can call the setGroupInfo API to set the group joining option (GroupAddOptType) to forbid anyone to join, which is tighter, or to disable the approval process, which is more flexible. 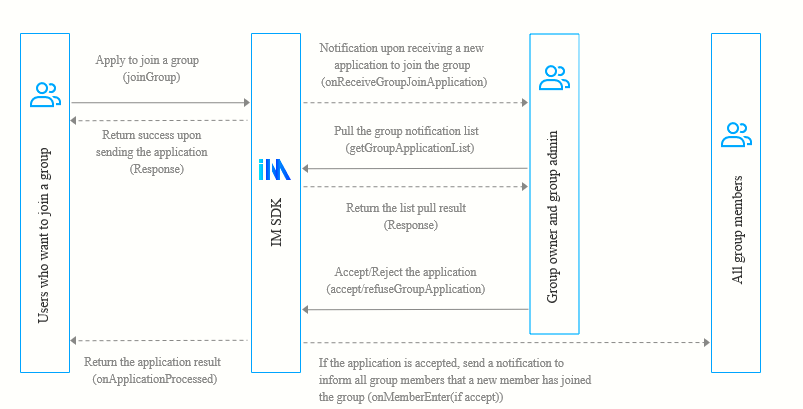 Call quitGroup to quit a group. The user who quits the group then receives the onQuitFromGroup callback and other group members receive the onMemberLeave callback.

For a public group (Public), meeting group (Meeting), community group (Community), or audio-video group (AVChatRoom), the group owner is not allowed to quit the group but can delete the group.

Call dismissGroup to delete a group. Then all group members receive the onGroupDismissed callback.

Call getJoinedGroupList to get a list of work groups (Work), public groups (Public), meeting groups (Meeting), and community group (Community) the current user has joined. Audio-video groups (AVChatRoom) will not be included in this list.

Call setGroupInfo to modify the group profile. When the modification is complete, all group members receive the onGroupInfoChanged callback.

Call getGroupMemberList to get the list of group members of a given group. The list contains profile information about individual members, such as user ID (userID), group name card (nameCard), profile photo (faceUrl), nickname (nickName), and time of joining group (joinTime).
As a group might have a large number of members (for example, 5,000+), this API supports two advanced attributes: filter and nextSeq.

When calling the getGroupMemberList API, you can specify filter to pull the information of certain roles.

In many cases, it makes more sense for the user interface to display the first page of the group member list instead of the complete list. More group members can be pulled when the user clicks Next Page or pull the list to refresh. For this scenario, you can apply the method of pulling paginated results.

Call getGroupMembersInfo to get the profile of group members in batches. You can pass in multiple userID at a time to improve network transmission efficiency.

The group owner or admin can call the setGroupMemberInfo API to modify the group-related information of members, including the group name card (nameCard), group member role (role), muting duration (muteUntil), and custom fields.

The group owner or admin can call the kickGroupMember API to remove a group member. As an audio-video group (AVChatRoom) can have unlimited members, it does not support the API. You can use muteGroupMember to achieve the same effect instead.
After the member is removed, all group members (including the kicked member) receive the onMemberKicked callback.

The group owner can call setGroupMemberRole to change the role of a member of a public group (Public) or meeting group (Meeting). Roles available for changing are ordinary member and group admin.

2. Why doesn’t the group receive notifications when a user joins or quits the group?

3. Why does the unread count of a meeting group (Meeting) remain at 0?