This document introduces the live playback feature of the Video Cloud SDK.

Live streaming and video on demand

The table below lists the common protocols used for live streaming. We recommend FLV URLs (which start with http and end with flv) for LVB and WebRTC for LEB. For more information, please see LEB.

The Video Cloud SDK does not impose any limit on the sources of playback URLs, which means you can use it to play both Tencent Cloud and non-Tencent Cloud URLs. However, the player of the SDK supports only live streaming URLs in FLV, RTMP, HLS (M3U8), and WebRTC formats and VOD URLs in MP4, HLS (M3U8), and FLV formats.

Regarding frequently asked questions among developers, Tencent Cloud offers a straightforward API example project, which you can use to quickly learn how to use different APIs.

In iOS, a view is used as the basic UI rendering unit. Therefore, you need to configure a view, whose size and position you can adjust, for the player to display video images on.

Technically, the player does not render video images directly on the view (_myView in the sample code) you provide. Instead, it creates a subview for OpenGL rendering over the view.

You can adjust the size of video images by changing the size and position of the view. The SDK will make changes to the video images accordingly. 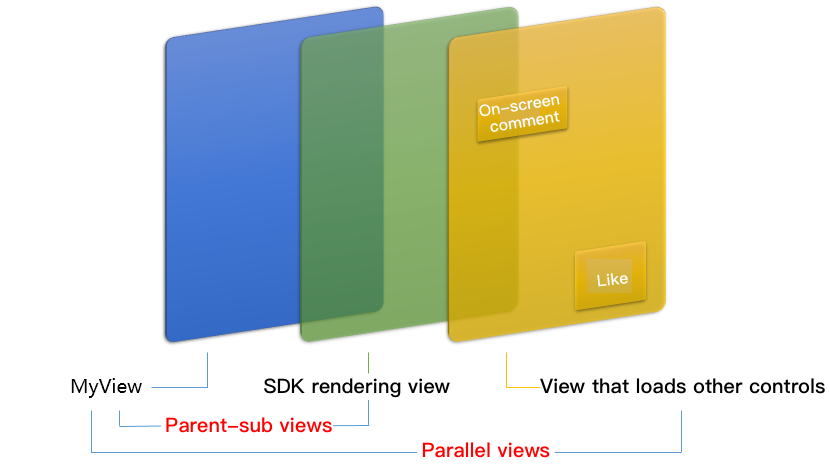 How can I animate views?
You are allowed great flexibility in view animation, but note that you need to modify the transform rather than frame attribute of the view.

Technically speaking, you cannot pause a live playback. In this document, by pausing playback, we mean freezing video and disabling audio. In the meantime, new video streams continue to be sent to the cloud. When you resume playback, it starts from the time of resumption. This is in contrast to VOD. With VOD, when you pause and resume playback, the player behaves the same way as it does when you pause and resume a local video file.

Call snapshot to take a screenshot of the live video streamed. You can get the screenshot taken in the onSnapshotComplete callback of V2TXLivePlayerObserver. This method captures a frame of the streamed video. To capture the UI, use the corresponding API of the iOS system.

The live playback feature of the SDK is not based on FFmpeg, but Tencent Cloud’s proprietary playback engine, which is why the SDK offers better latency control than open-source players do. We provide three latency control modes, which can be used for showrooms, game streaming, and hybrid scenarios.

You can bind a V2TXLivePlayerObserver to your V2TXLivePlayer object to receive callback notifications about the player status, playback volume, first audio/video frame, statistics, warning and error messages, etc.

Other callbacks are triggered when specific events occur.