How can I adjust the sync interval of NTP after configuring the NTP service?

After configuring the NTP service as instructed in Setting Up NTP Service (Linux), you can restart ntpd to reset the sync interval. To manually set the ntpd synch interval, perform the following steps:

The result should be as follows. Enter :wq to save changes and close the file.

What is the time source of Tencent Cloud's ntpd servers?

What should I do when the NTP configuration reports the localhost.localdomain timeout error?

The error is shown below. 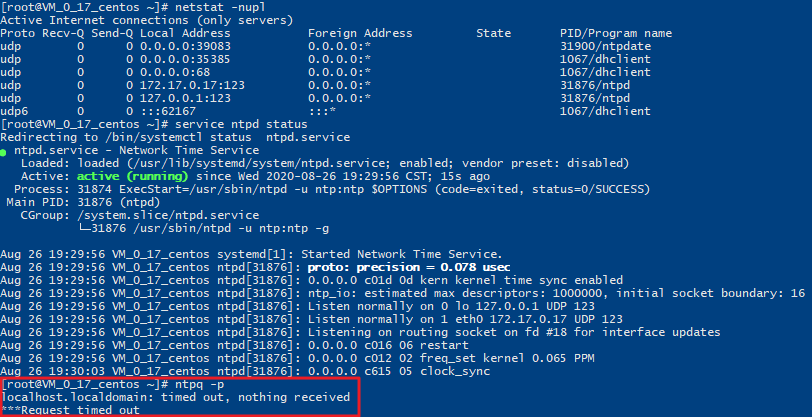 Check and confirm whether you ran POSTROUTING. If yes, change the source IP in the ntp.conf configuration file to eth0's IP address.

Can off-cloud servers share a NTP with Tencent Cloud CVMs? What is the NTP synchronization address?

The following are old public NTP server addresses. These old addresses can still be used, but you are advised to use the new ones.

Why is the time of a CVM instance created from a custom image incorrect?

Please check whether the NTP service is enabled. To use the NTP synchronization feature later, see the following documents to set NTP. Then re-create the custom image.

Why is the ntp.conf content of a CVM created from a custom image restored?

It may be caused by the Cloud-Init initialization. Please delete the NTP-related configurations in /etc/cloud/cloud.cfg before creating a custom image. For more information, see Cloud-Init & Cloudbase-Init.

What impact will a modified private network DNS have?

Why does the local time of a Windows instance reset from the configured EST to UTC+8 after restart?

Check that the windowstime service is enabled on the instance. You may need to manually enable it to auto sync the instance's system time. We recommend enabling the service autostart.

Why cannot I use the ntpq -np command to view the synchronization time?

The error is shown below.

Please check whether no IP or incorrect IP is configured for listen in the /etc/ntp.conf configuration file. Change to the primary private IP of the instance and restart ntpd.

How do I fix the error occurred when using the public NTP servers to sync time?

When using the public NTP servers to sync time, the no server suitable for synchronization found error occurs.

This may be caused by the NTP protection policy in response to the DDoS attacks to the public IP address of the instance. This policy blocks all public inbound traffic at the Tencent Cloud's source point 123 and causes synchronization exception. We recommend trying to use the private NTP servers to sync time.