What is Session Persistence?

When do I need session persistence?

Before discussing this problem, we must take the time to figure out some concepts: what is a Connection, what is a Session, and the difference between the two. It is important to note that if we are only talking about cloud load balance, sessions and connections usually have the same meaning.

After the connection is deleted, the client's request will not certainly be sent to the same backend CVM; instead, the CLB's traffic distribution policy prevails.

In some situations where login is required, a session is required between the client and the server to record various information on the client. For example, in most e-commerce applications or online systems that require user authentication, a client often go through several interactions with the server to complete a transaction or a request. Since these interactions are closely interrelated, in a certain interactive step of these interactions, the server often needs to know the result(s) from the last or last few interactions, which in turn requires that all of these associated interactions be completed by one server and cannot be distributed by the cloud load balancer to a different server. Otherwise, abnormalities may occur:

The significance of the session persistence mechanism is therefore to ensure that requests from the same client are forwarded to the same backend CVM for further processing. In other words, the connections established between the client and the server are sent to the same server for processing. If a cloud load balancer is deployed between the client and the server, it is likely that the multiple connections will be forwarded to different servers for processing. If there is no session information synchronization mechanism between servers, other servers may not identify the user's identity, resulting in exception on interaction between the user and the application system.

Cloud load balancer is to have the connections and requests from clients evenly forwarded to multiple CVMs to avoid overload of a single CVM; while the session persistence mechanism requires that certain requests be forwarded to the same server. Therefore, in the actual deployment environment, we have to select the appropriate session persistence mechanism according to the characteristics of the application environment.

It's easy to implement simple session persistence, which requires only layer-3 or 4 information of packets, the efficiency being high.

However, the problem with this approach is that when multiple clients access the server through proxy or address translation, the requests are delivered to the same server due to the same source address, resulting in a serious imbalance between servers.

In another situation, when a same client generates a large number of concurrent requests to multiple servers for further processing, session persistence occurs. In this case, the source address based session persistence will also lead the cloud load balancer to failure.

In above situations, we must consider using other ways for session persistence.

Sharing session between various servers is achieved through a file system (such as NFS). This method is suitable for sites in low concurrency.

Use Memcached to save Session data which is read directly from the memory.

In the cookie based mode, CLB is responsible for inserting cookies without making any modification to backend CVM. When the client makes the first request, the client HTTP request (without cookie) is directed to CLB, which then selects a backend CVM basing on load balancing algorithm policy and sends the request to the CVM. Then CVM's HTTP response (without cookie) is sent back to CLB. After that, the CLB inserts a cookie into the backend CVM and returns the HTTP response to the client.

When the client makes the second request, the client HTTP request containing the cookie inserted by CLB last time is directed to CLB, which then reads the session persistence values in the cookie and sends the HTTP request (with the same cookie as above) to the specified CVM. Then the backend CVM gives a response, and because the CVM does not write the cookie, the HTTP response does not contain the cookie. When the HTTP response flows into the CLB again, the updated session persistence cookie will be written to CLB. 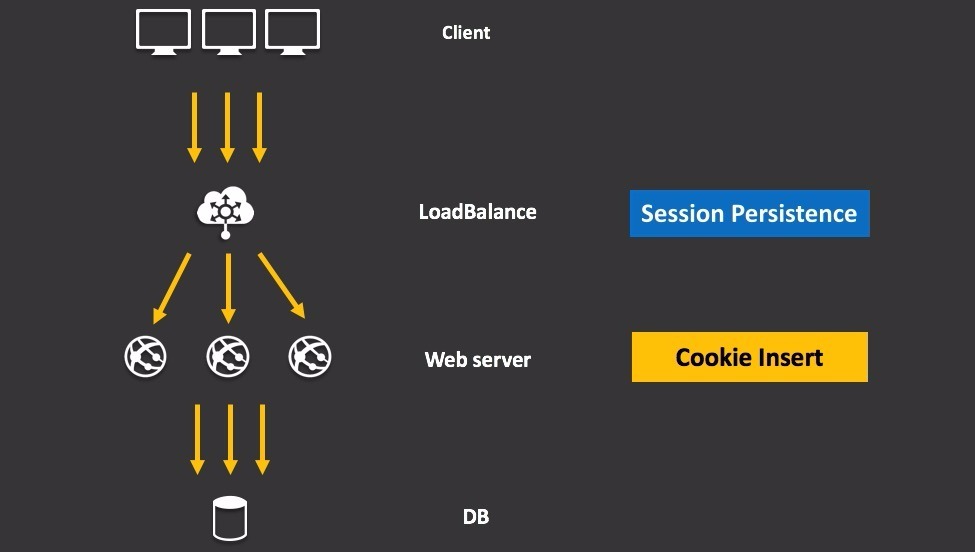