Communication of a web application is as follows: the client sends a request via the browser, the server receives the request, processes it, and returns the result to the client. The client's browser then displays the information. This mechanism better support applications with infrequent information change. However, it may be less effective for applications with high requirement for real-time transmission and high concurrence. Given the robust growth of mobile internet, web application frequently encounters high concurrence and demands for real-time response. This includes real-time information on financial securities, geographic information in web-based navigation apps, and real-time message push in social network.

Adobe Flash uses its embedded Socket to implement data exchange and Flash to expose related APIs for JavaScript to call, achieving real-time communication. This method is more efficient than polling, because Flash is commonly installed and widely used. However, Flash is not well supported on mobile devices. iOS does not support Flash, while Android provides poor support for Flash with high requirements for hardware configuration. In 2012, Adobe announced that Flash no longer supported Android 4.1 and above, marking the end of Flash on mobile devices.

Traditional web modes would encounter difficulties when handling demands with high concurrence and real-time communication. A bi-directional communication mechanism with cost efficiency was required to facilitate real-time data transmission. WebSocket, known as "web TCP", was thereby developed based on HTML5. At the early stage, the industry had no unified HTML5 specification. Browser and application server vendors had different implementation methods, such as MQTT of IBM and Comet’s open-source framework. In 2014, HTML5 was established as a standard specification. Application server and browser vendors gradually unified their HTML5 implementation, and WebSocket protocol was implemented in Java EE 7. At this point, WebSocket for clients and servers is fully established. For more information on the new HTML protocol and WebSocket support, see HTML5 Specification.

The following is an overview of the principle and operating mechanism of WebSocket.

WebSocket is a new HTML5 protocol, which implements full-duplex communication between browser and server. It supports real-time communication and reduces the consumption of server resources as well as bandwidth. Similar to HTTP, WebSocket uses an established TCP connection to transmit data. However, their biggest differences are:

The traditional HTTP request-response mode between server and client is as shown below: 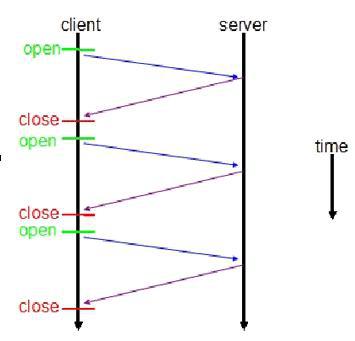 The WebSocket client-server request-response mode is as shown below: 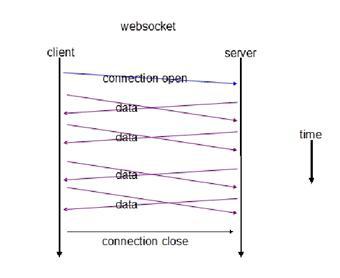 In traditional HTTP mode, each request-response requires a new connection between the client and server. WebSocket, which is similar to Socket, is a communication mode based on persistent TCP connection. Once a WebSocket connection is established, subsequent data will be transmitted in the form of frame sequence. The client or server does not need to initiate a connection request again before WebSocket is disconnected. In scenarios with high concurrence or high volumes of load traffic on client and server, WebSocket significantly reduces consumption of network bandwidth resources and improves performance. In addition, the client sends and receives messages over a persistent connection, achieving real-time communication.

Compared to HTTP persistent connection, WebSocket has the following advanatges:

Below is a comparison between WebSocket and traditional HTTP based on messages exchanged between the client and the server:

The new WebSocket instantiates a new WebSocket client object on the client and requests a WebSocket URL similar to ws://yourdomain:port/path from the server. The client WebSocket object automatically parses and recognizes the WebSocket request, connects the server port, and implements handshake. The client sends data in the following format:

After receiving the message, the server returns data in the following format:

The value of Sec-WebSocket-Accept is calculated by the server using the same key as that of the client and then returned to the client. HTTP/1.1 101 Switching Protocols indicates that the server accepts the connection from the client over WebSocket. After this request-response, WebSocket handshake between the client and server is completed. TCP communication can now be implemented. For more information on data exchange format between WebSocket client and server, see WebSocket Protocol Stack.

WebSocket API is easy to use in development. You only need to instantiate WebSocket and create a connection. The server and client can then send messages to each other and respond accordingly. For more information on WebSocket API and code implementation, see WebSocket implementation and case analysis sections.

Tencent Cloud offers Layer-7 public network CLB for daily rental whose forwarding module supports WebSocket. Multiple customers such as Heroes Evolved and Yinhan Games have connected to this service. If incompatibility occurs, modify the WebSocket configuration. The WebSocket server does not verify circled fields in the figure below:

To use WebSocket in your video business, follow the steps below: