SSL/TLS is an optional protocol between the application layer (HTTP) and the transport layer (TCP). Its protocol architecture is as shown below: 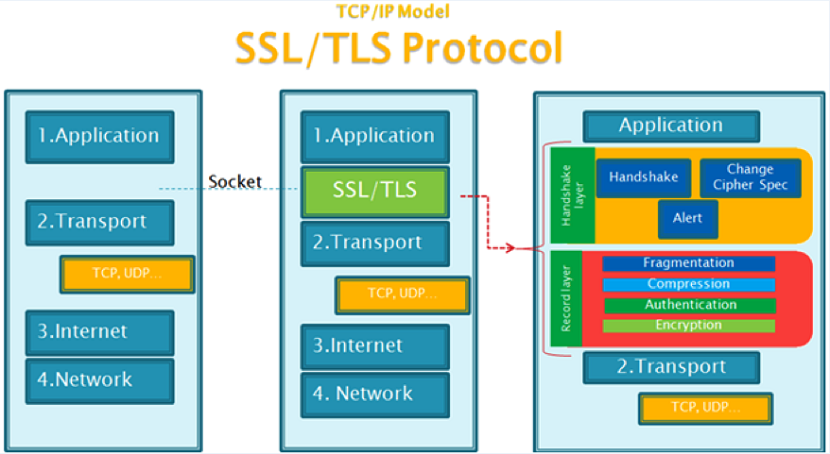 If HTTP communication does not use SSL/TLS, all information will be transmitted in plaintext, which involves the following risks:

SSL/TLS protocol is designed to address these risks with the following goals:

SSL/TLS protocol uses public-key encryption. The client requests the public key from the server first, and uses it to encrypt as well as send the information to the server. After receiving the ciphertext, the server decrypts it with its private key.

There are two problems to be solved:

The first two steps are known as "handshake". 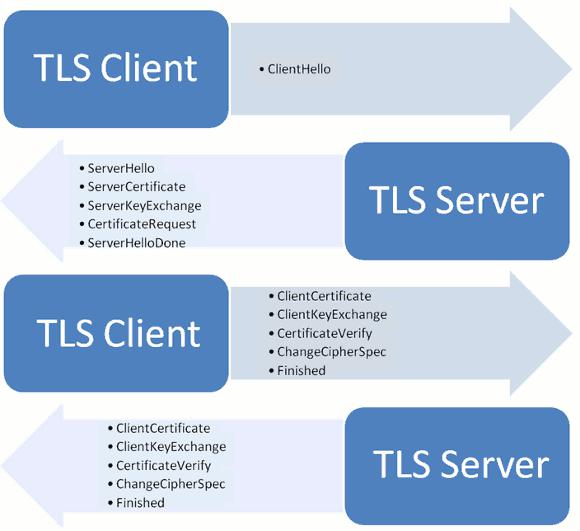 A "handshake" involves four stages of communication where all information is transmitted in plaintext.

The client (usually a browser) first sends a request for encrypted communication to the server, which is generally called a “ClientHello” request.

In this step, the client mainly provides the following information to the server:

This is inconvenient for users of virtual host. To solve this, Server Name Indication was added in 2006 as an extension to TLS protocol, allowing the client to provide the server with the requested domain name.

After the server receives the client request, it sends a response to the client, which is generally called “ServerHello”. The server's response contains the following information:

If the server needs to confirm the client identity, it will also request a "client certificate". For example, financial institutions usually only allow authenticated customers to connect to their networks. Their customers are provided with USB keys, which contain client certificates.

The random number mentioned above is the third random number used during the entire handshake process, which is also known as a "pre-master key". Both the client and server now have three random numbers. They can generate the same "session key" used for this session via the encryption method agreed upon in advance.

For RSA key exchange algorithms, the pre-master key is a random number. When it is coupled with the two random numbers in “hello” messages, a final symmetric key will be generated through key derivation.

In addition, if the server requests a client certificate in the previous step, the client will send the certificate and related information in this step.

Final response from the server

After receiving the pre-master key (the third random number) from the client, the server calculates and generates the "session key" used for this session. It then sends the following information to the client:

The entire handshake process has now ended. The client and the server begin encrypted communication. HTTP protocol is used, except that the content is encrypted with the "session key".

Below is a simple example to illustrate the process. Assume that SSL client A communicates with SSL server B. The encrypted message is enclosed in square brackets "[]" to distinguish from plaintext message. The description of actions by both parties is enclosed in parentheses "()".

Send the certificate to A.

Check whether the name of B in the certificate is correct, and verify the authenticity of B's certificate with the existing CA certificate. If something is wrong, it will issue a warning and close the connection. This step guarantees that B's public key is authentic.

Generate a secret message, which will be processed and then used as the encryption key to encrypt the initialization vector (IV) and the key for HMAC. This secret message (called per_master_secret in the protocol) is encrypted with B's public key and encapsulated into a message called ClientKeyExchange. Using B's public key prevents eavesdropping.

Process the secret message to generate the encryption key, and encrypt the IV and the key for HMAC.

Use its own private key to decrypt the secret message in ClientKeyExchange, process it to generate the encryption key, and encrypt the IV and the key for HMAC. The two parties have now securely agreed on an encryption method.