In a high-performance concurrent internet architecture, the performance bottleneck usually occurs in the database server, especially when the number of users of the business reaches more than one million. In this case, you can cope with problems such as database performance and scalability by performing reasonable data sharding at the data layer. Database sharding can be performed in two dimensions: vertical sharding (by feature) and horizontal sharding

A relational database is a two-dimensional model. To shard data, it is usually necessary to find a shardkey field to determine the sharding dimension. Then, a rule needs to be defined to actually shard the database. You need to comprehensively evaluate your business needs to find a suitable sharding rule. Several common sharding rules are described below:

In terms of sharded data source management, there are currently two modes:

TDSQL for MySQL is a distributed database service deployed in Tencent Cloud that is compatible with MySQL protocol and syntax and supports automatic sharding (horizontal sharding). With a distributed database, your business obtains a complete logical database table which is split and distributed evenly across multiple physical shard nodes on the backend. Currently, TDSQL deploys the primary-secondary architecture by default and provides a full set of solutions for disaster recovery, backup, restoration, monitoring, and migration, making it ideal for storing terabytes to petabytes of data.
Development of TDSQL can be traced back to 2004, when the internet-based value-added services of Tencent started to burst, which brought huge scaling pressure to the MySQL database. Therefore, the mechanism of database sharding and table splitting was introduced to solve a challenging problem: a huge table is pre-split into multiple subtables by ShardKey, which are spread across different physical server nodes. Nowadays, the volume of data stored on the TDSQL backend is very huge. Taking "Midas" as an example, TDSQL sustains 10 billion accounts in all channels of Midas, where the number of users is close to 900 million, and daily transaction amount exceeds 1 billion CNY.

TDSQL has the following advantages to easily sustain massive amounts of business requests:

The architecture of a TDSQL instance is as follows: 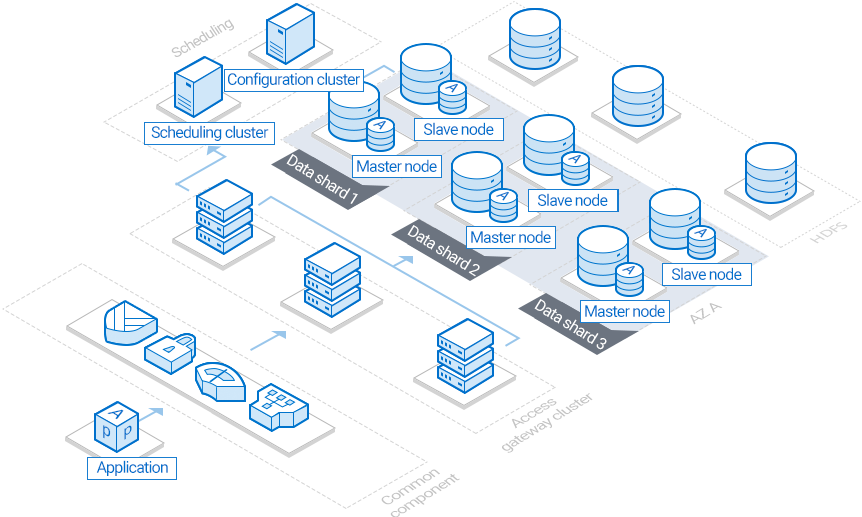 In TDSQL, each shard is configured with two nodes by default, i.e., one primary and one secondary, and each TDSQL instance has at least two shards.

Scheduling cluster: this acts as the cluster management scheduling center and is mainly used to manage the normal operations of SET and record and distribute global database configurations.
Access gateway cluster (TProxy): this manages SQL parsing and assigns routes at the network layer, which can be seen as middleware in an open-source distributed database.

In order to prevent the proxies from becoming a bottleneck, the number of proxies generally should equal to the number of shards.

TDSQL backups are stored for 7 days by default.