User-generated content (UGC) and professionally generated Content (PGC) platforms are two common scenarios in the video industry where video content can be freely uploaded and shared.

However, third-party video platforms may impersonate normal users to upload videos to your platform and then put the URLs of those videos on their own platforms. In this way, they can "live" on your platform like a parasite and get "free" access to video storage and playback acceleration. As a result, your video platform is used maliciously by others as a free video hosting service, which is called "malicious video hosting".

Malicious video hosting can cause serious economic losses since all the storage, bandwidth, and traffic fees incurred by the parasites have to be borne by you.

How UGC/PGC platforms interact with others normally 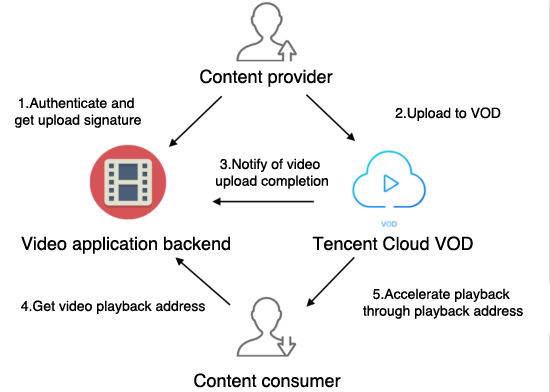 Generally, a UGC (or PGC) video platform interacts with content providers, content consumers, and VOD in the following ways (for more information on steps 1–3, please see Upload from Client):

How malicious video hosting is implemented 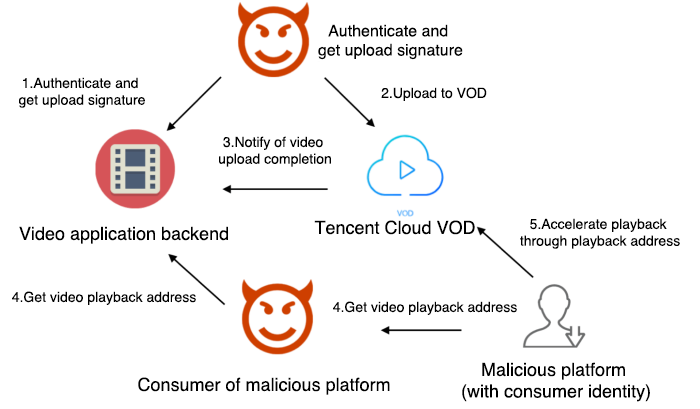 A malicious third-party video platform impersonates a normal user of your platform:

Core causes of the problem

The ultimate purpose of malicious video hosting is to steal others' CDN bandwidth resources (while taking advantage of their storage resources). Malicious users do so mainly for the following:

In view of the core causes of malicious video hosting listed above, the key solutions lie in:

The following describes how VOD helps you restrict playback of and access to URLs.

Restricting playback of URLs alone cannot effectively prevention malicious video hosting. This is because in step 4, a malicious platform can make countless requests for different hotlink protection-enabled URLs for the same video and then distribute those URLs to its own users, thus bypassing the restriction on the number of IPs allowed for playback.

In response, the application backend needs to verify user identity in step 4 and impose frequency control, i.e., how many times an individual user can get the same playback URL within a specified period of time. This can prevent malicious users from getting a large number of video playback addresses in a short period of time.