Nginx Ingress is an implementation of Kubernetes Ingress. By watching the Ingress resources of Kubernetes clusters, it converts Ingress rules into an Nginx configuration to enable Nginx to perform Layer-7 traffic forwarding, as shown in the figure below: 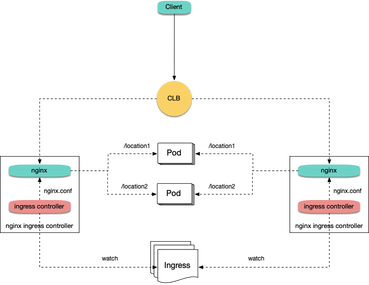 Nginx Ingress can be implemented in the following two modes. This document mainly introduces the implementation of Kubernetes in the open-source community:

Based on a comparison of the three deployment solutions for Nginx Ingress on TKE, this document offers the following selection suggestions:

Currently, by default, a LoadBalancer-type Service on TKE is implemented based on NodePort: the CLB binds the NodePort of each node as the RS (Real Server) and forwards traffic to the NodePort of each node. Then through Iptables or IPVS, nodes route requests to the corresponding backend pod of the Service (namely the pod of Nginx Ingress Controller). Subsequently, if nodes are added or deleted, the CLB will automatically update the node NodePort binding.
Run the following commands to install Nginx Ingress:

In solution 1, traffic passes through a NodePort layer, introducing one more layer for forwarding, which leads to the following issues: 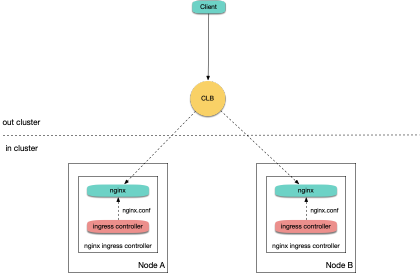 In solution 3, the following solution is proposed:

How can private network Ingress be supported?

In solution 2: Daemonset + HostNetwork + LB, the CLB is manually managed. When creating a CLB, you can select public network or private network. In solution 1: Deployment + LB and solution 3: Deployment + LB directly connected to pod, public network CLBs are created by default.
To use a private network, you can redeploy YAML and add a key to the Service in nginx-ingress-controller, for example, service.kubernetes.io/qcloud-loadbalancer-internal-subnetid, with value set to the annotation of the subnet ID created by the private network CLB. Refer to the following code:

How can an existing LB be shared?

In solution 1: Deployment + LB and solution 3: Deployment + LB directly connected to Pod, new CLBs are automatically created by default. The traffic entry address of Ingress depends on the IP address of the newly created CLB. If a business is dependent upon the entry address, you can bind Nginx Ingress with an existing CLB.
The specific method is to redeploy YAML and add a key to the Service in nginx-ingress-controller, such as service.kubernetes.io/tke-existed-lbid, with value set to the annotation of the CLB ID. Refer to the following code:

What’s the size of the Nginx Ingress public network bandwidth?

There are two types of Tencent Cloud accounts: bill-by-IP accounts and bill-by-CVM accounts:

How can I create an Ingress?

How can I enable monitoring?

For Nginx Ingress installed through the method in How can I create an Ingress, the metrics port has been opened and can be used for Prometheus collection. If prometheus-operator is installed in the cluster, you can use ServiceMonitor to collect monitoring data for Nginx Ingress. Refer to the following code:

For native Prometheus configuration, refer to the following code:

After collecting monitoring data, you can configure the dashboards provided by the Nginx Ingress community for grafana and display data.
In actual operation, you can directly copy JSON data and import it to grafana to import dashboards. nginx.json is used to display the various regular monitoring dashboards for Nginx Ingress, as shown in the figure below: 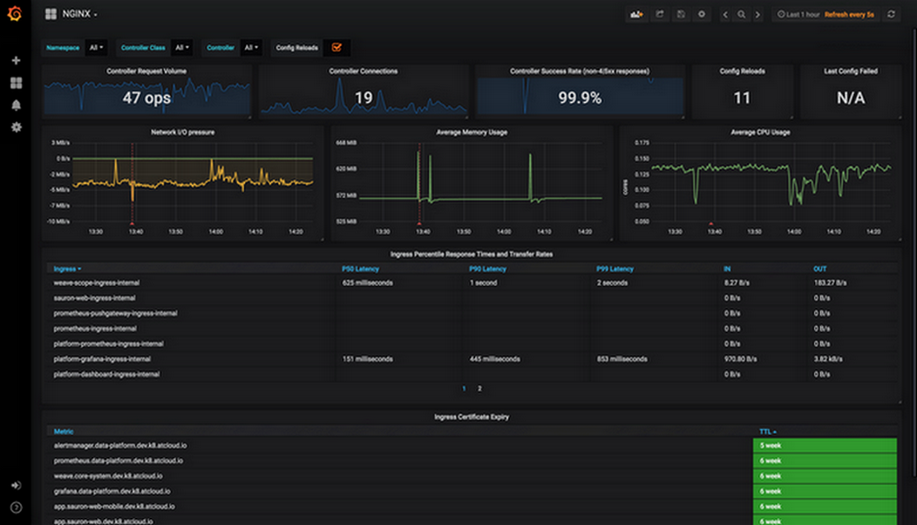 request-handling-performance.json is used to display the performance monitoring dashboard of Nginx Ingress, as shown in the figure below: 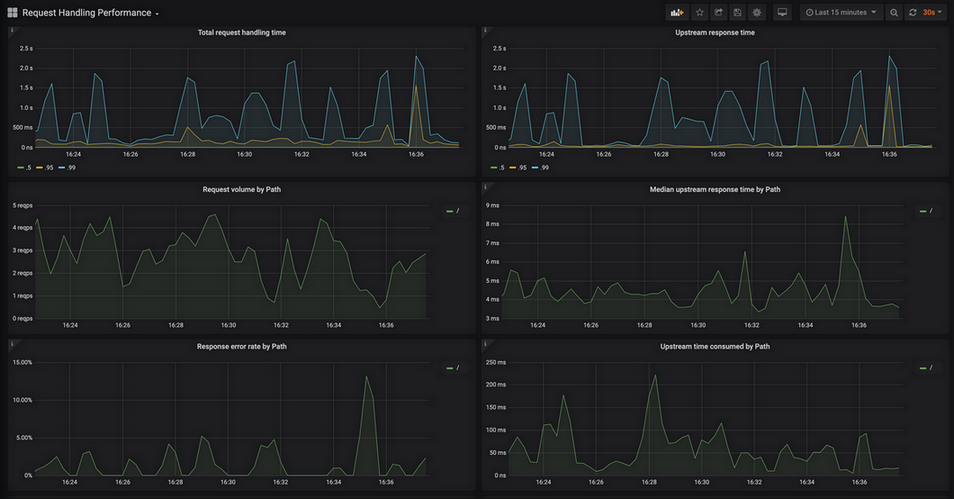