What operating systems are supported by CFS?

You can use CFS over the Tencent Cloud private network (e.g., Linux, Unix or Windows CVM, TKE, SCF, BatchCompute, and BMS instances). Customer IDCs and compute nodes of other vendors can also access CFS via VPN, Direct Connect, or CCN (click here for more information).

How is CFS billed?

CFS is billed hourly based on the peak storage usage for the hour.

As storage usage in the Chinese mainland is billed in a consolidated manner, the billing zone displayed in CFS bills is "South China (Guangzhou)". The specific regions are shown in the extended fields.

As clients on Windows and Linux 3.10 and its previous kernel version (e.g., CentOS 6.*) are incompatible with NFS v4.0, they cannot work normally after mount. Please use NFS v3.0 instead.

What are the common concepts used in CFS?

How many file systems can a user create?

Up to 10 file systems can be created in a region by each user. You can submit a ticket if you need to create more.

How do I ensure data consistency if multiple applications read and write to the same file?

We recommend that you lock a file before an application reads or writes to the file to avoid errors caused by multiple applications modifying the same file simultaneously.

How fast can I copy/migrate data to CFS?

It depends on the host where the data is originally stored, the storage medium used, network conditions, and the file size. The higher performance the host delivers, the better the storage medium, and the higher the outbound bandwidth, the faster data migration will be. Assume that a host comes with 8 cores and 16 GB memory, and the bandwidth is 1.5 Gbps. The speed of migrating a small file of 4 KB from the host’s local storage to CFS using the migration tool CFS Filetruck will be about 40 KB/s, and that of migrating a large file of 1 TB will be about 140 MB/s. If you copy/migrate primarily small files, we recommend that you use NFS v3 to mount CFS to improve the speed.

What if a mount target is unavailable?

You can troubleshoot the issue as follows:

What do I do if an error is reported when I use the "vers=4.0" mount command?

As some clients support NFS v4.1 Protocol, the client will first negotiate with the server to try to mount using NFS v4.1 Protocol. In this case, because CFS currently only supports NFS v4.0 Protocol, a NFS4ERR_MINOR_VERS_MIMATCH error may be reported, which will not affect the mount and can be ignored. Once the negotiation fails, the client and server will continue to negotiate the use of NFS v4.0 for the mount.

What do I do if I installed Windows IIS web server in the Windows Server 2016 OS, but IIS and CIFS are incompatible?

When default security policies are changed in the Windows Server 2016 OS, the following configurations are needed.

If the registry key already exists, set it to 1. Otherwise, right-click to select New > DWORD (32-bit) Value, and set it to AllowInsecureGuestAuth with a value of 1.
2. Specify a local user for storage access:
Open the Internet Information Services (IIS) Manager, and under the current host:
1. Select Sites>Default Web Site, and click Basic Settings".
2. In the “Edit Site” dialog box, click **Connect as to select a specific user.
3. Click Set to set the user name and password.
4. Click OK.

What if data cannot be written to CFS?

You can troubleshoot the issue as follows:

Which ports need to be opened for the file system?

What if the configured access permission does not take effect?

For an NFS file system, multiple rules can be configured, which will take effect based on their priorities:

Priority configuration is not supported for CIFS/SMB file systems and will not take effect.

How can I speed up copying local files to CFS?

For Linux, use the shell script below to accelerate copying local files to CFS. The "number of threads" in the code can be changed as needed.

What should I do if an exception occurs when renaming a file or directory on Windows?

Due to issues between the client and the supported protocols, renaming a file or directory may fail if a Windows client mounts the file system with NFS. In this case, we recommend using CIFS/SMB for CFS file systems on Windows.

What if a file system has no write permission on Windows after being mounted with NFS?

Add AnonymousUid and AnonymousGid to the Registry as described in the operation guide and try again after restarting the system.
For more information, please see Using CFS File Systems on Windows Clients

What if mapped drives cannot be used with Windows IIS?

You can configure the correct NFS client program and modify the Registry (by adding users for access) as instructed in Using CFS File Systems on Windows Clients.
Restart the client, open the IIS configuration page, add a site, and click Advanced Settings. 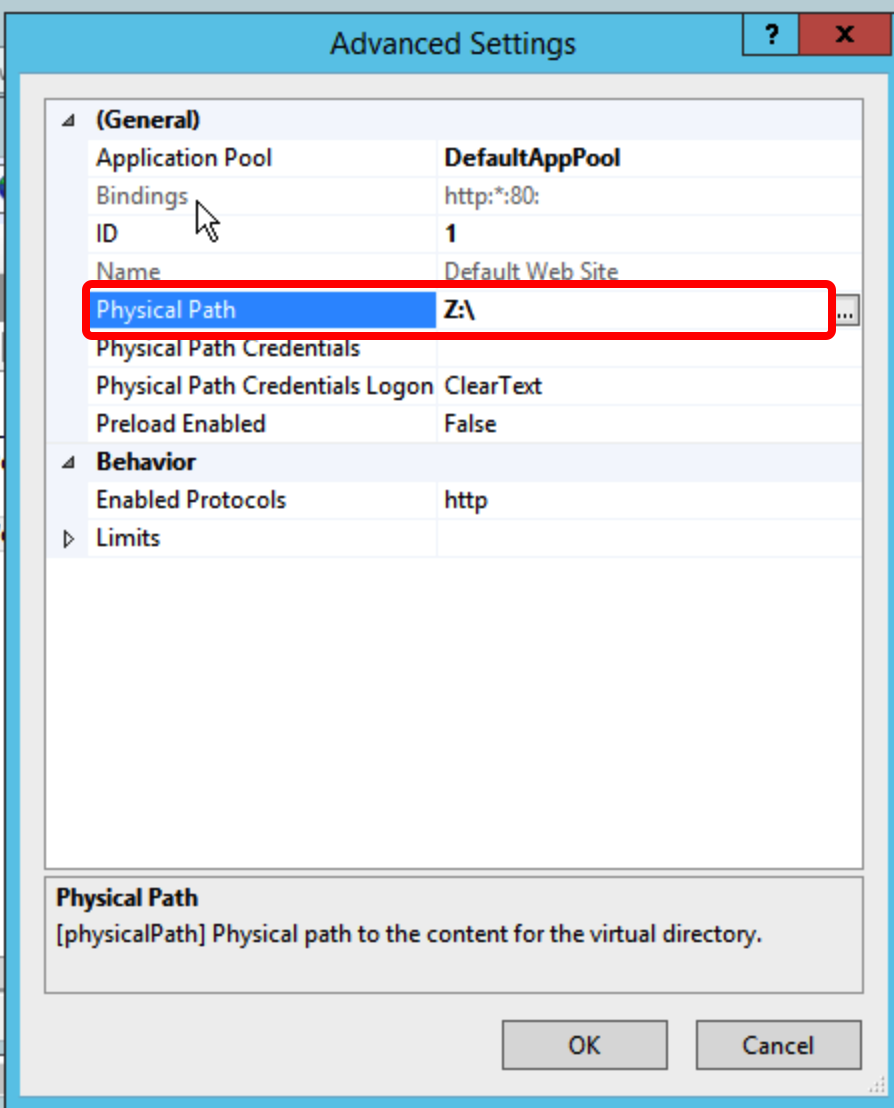 Mounting a CFS file system on Docker or Kubernetes can succeed sometimes but fail at other times. How to solve this problem?

This issue is caused by protocol compatibility. NFS v3 is recommended for mounting CFS with clients such as Docker and Kubernetes. Using NFS v4 may lead to issues with some clients.

What if I want to use a CFS file system on Window Server 2012 R2 as IIS server directory, but the file system cannot be mounted?

IIS will convert the FSID needed for mounting with NFS v3.0 to uppercase, which prevents the file system from being mounted. We recommend using Windows Server 2016 to avoid this issue.

How can I continue using CFS in an AZ where CFS resources are sold out?

The file content update is out of sync. How can I fix this?

This issue is related to the option of the NFS mount command and the implementation of tail -f. The following mount command is used:

If CVM instance B mounts the file system with the NFS mount command, the kernel will maintain a metadata cache of the file and directory attributes (e.g., permissions, size, and timestamp) by default. The purpose of caching is to reduce the number of NFSPROC_GETATTR remote procedure calls (RPCs).

tail -f observes the changes to file attributes (mainly the file size) through sleep+fstat and then reads the file and outputs the content. The result of fstat determines whether tail -f can output the file content in real time. However, due to the metadata cache of file and directory attributes, fstat cannot poll real-time file attributes. As a result, although the file on the NFS server has been updated, tail -f cannot observe the change, which causes an output delay.

What should I do if the error 0x800704C9 occurs when an NFS file system is mounted to a client based on Windows 7 or Windows Server 2008 R2?

The issue occurs because Windows 7-based and Windows Server 2008 R2-based clients cache the original port numbers used to communicate with nlockmgr. For details, see the Microsoft help documentation.

Run Windows Update to upgrade the OS to the latest version to fix this issue.

What do I do if I use the NFS v3 protocol to mount the file system on a Windows client, but an error occurs when I create or modify a file?

The NFS v3 protocol does not support locking. The locking needs to be disabled. Otherwise, files may fail to be modified.

After the file system is mounted, open the command-line tool and enter "mount". If "Locking=yes" is displayed, you can modify the registry to forcibly disable locking.