GooseFS-FUSE can mount a GooseFS system to a local file system on a Unix machine. Using this feature, some standard command-line tools (such as ls, cat, and echo) can directly access data in the GooseFS system. More importantly, applications implemented in different languages, such as C, C++, Python, Ruby, Perl, and Java, can use standard POSIX APIs (such as open, write, and read) to read and write GooseFS without any client-side integration and setup of GooseFS.

GooseFS-FUSE is based on the FUSE project and supports most file system operations. However, due to the inherent properties of GooseFS, such as its one-time, immutable file data model, the mounted file system does not fully conform to POSIX standards and has some limitations. Therefore, read Limitations first to see what this feature does and what its limitations are.

After configuring and starting the GooseFS cluster, start Shell on the node where you want to mount GooseFS, go to the $GOOSEFS_HOME directory, and run the following command:

This command starts a background Java process that mounts the corresponding GooseFS path to the path specified by <mount_point>. For example, mount the GooseFS path /people to the /mnt/people directory on the local file system.

If GooseFS_path is not specified, GooseFS-FUSE is mounted to the GooseFS root directory (/) by default. You can run this command multiple times to mount GooseFS to different local directories. All GooseFS-FUSE clients will share the $GOOSEFS_HOME\logs\fuse.log log file. This log file is useful for troubleshooting.

<mount_point> must be an empty folder in the local file system, and the user that starts the GooseFS-FUSE process must have the read/write permission on the mount target.

To unmount GooseFS-FUSE, you need to start Shell on the node, go to the $GOOSEFS_HOME directory and run the following command:

This command ends the Java background process of GooseFS-FUSE and unmount the file system. The following is an example:

Checking whether GooseFS-FUSE is running

List all mount targets, start Shell on the node, go to the $GOOSEFS_HOME directory, and run the following command:

This command will output information including pid, mount_point and GooseFS_path.

The following is an example of the output format: 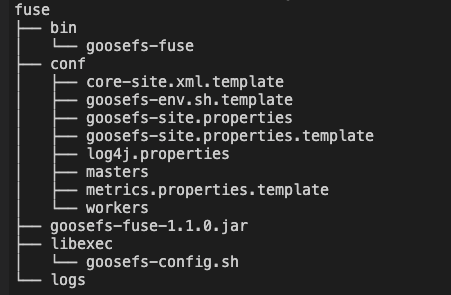 The structure of the conf directory is as follows:

You can edit the $GOOSEFS_HOME/conf/goosefs-site.properties configuration file to modify the client options.

All modifications must be completed before GooseFS-FUSE is started.

Currently, GooseFS-FUSE supports most basic file system operations. However, due to some inherent features of GooseFS, you need to be aware of the following:

Due to the combination of FUSE and JNR, the performance of mounting file systems is relatively lower compared to using native file system APIs directly.

Most of the performance problems are due to the fact that there are several copies in the memory each time a read or write operation is performed, and FUSE sets the maximum granularity of write operations to 128 KB. Performance can be greatly improved with the FUSE write-backs cache policy introduced by Kernel 3.15 (however, the libfuse 2.x userspace library currently does not support this feature).

The following are GooseFS-FUSE related parameters:

Check whether the installation is successful:

You can change the VIM configuration to use VIM 7.4 or earlier for editing files in the GooseFS-Fuse mounting point. The VIM swap file is used to retain the modifications so that VIM can restore unsaved modifications based on the swap file if the machine crashes or restarts. The above error is due to a random write operation to a VIM swap file, while GooseFS does not support it. Solution: You can run the :set noswapfile command to terminate swap file generation or add set noswapfile to the configuration file (“~/.vimrc”).