The TRTC SDK uses the TRTCPrivilegedTask library to get root access and install the virtual sound card plugin TRTCAudioPlugin.driver in the system directory /Library/Audio/Plug-Ins/HAL.

In the entitlements file of the app, delete App Sandbox.

After you integrate the TRTCPrivilegedTask library and disable App Sandbox, when you use the system audio recording feature for the first time, the SDK will download the virtual sound card plugin from the internet and install it. To accelerate this process, you can package the virtual sound card plugin TRTCAudioPlugin.driver in the PlugIns directory of TXLiteAVSDK_TRTC_Mac.framework to the resources directory of the app’s bundle, as shown below.

Alternatively, copy the file to the PlugIns directory of the app’s bundle. 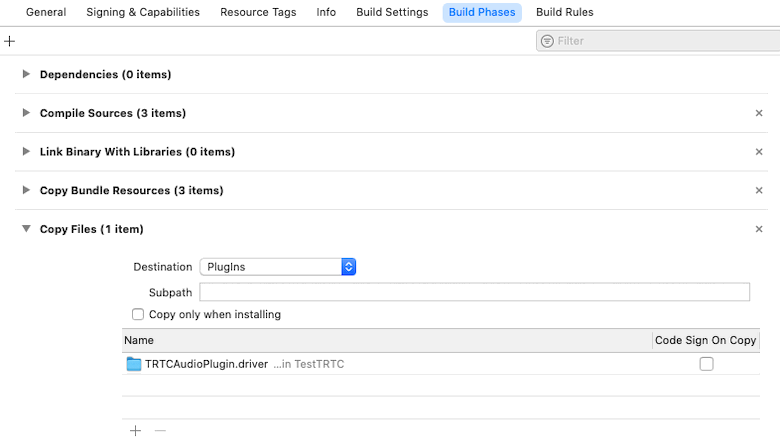 After the TRTCPrivilegedTask library is integrated and App Sandbox disabled, when you call startSystemAudioLoopback for the first time, the SDK will request root access, as shown below.
After being granted root access, the SDK will start installing the virtual sound card plugin to the computer automatically.

Call the setSystemAudioLoopbackVolume API to set the volume of system audio capturing.