RabbitMQ is a typical open-source messaging middleware program. It is popular among enterprise systems and suitable for scenarios with high requirements for data consistency, stability, and reliability.

Based on the high reliability of RabbitMQ/AMQP and by leveraging the Raft protocol in redesign and reimplementation, Tencent Cloud CMQ greatly improves the reliability, throughput, and performance.

This document describes RabbitMQ's reliability principle, improvement made by CMQ, and performance comparison between them.

A business may lose messages due to various issues such as network, server, or program exceptions. The message ACK mechanism can solve the problem of message loss. If a message is successfully acknowledged, it means that the message has been verified and correctly processed. 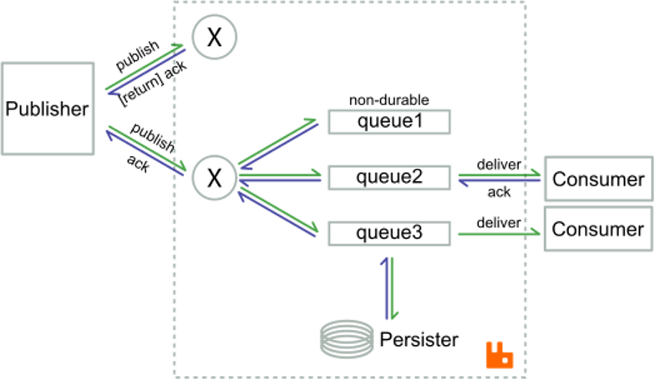 You can see that RabbitMQ/AMQP provides "at-least-once delivery". When exceptions occur, messages will be repeatedly delivered or consumed.

Produced message ACK is performed after message storage, and the message queue will return the ID of the stored message to the producer.

Comparison Between CMQ and RabbitMQ

CMQ has a lot of similarities with RabbitMQ in underlying principles and implementation methods; however, it is greatly upgraded and improved compared with RabbitMQ:

You can specify the number of days during which CMQ stores produced messages. Then, the messages can be rewound back to a time point in this period for consumption again starting from the time point. The message rewind feature is very useful in business restoration when the business logic is exceptional.

Both CMQ and RabbitMQ support hot backup with multiple servers to improve availability. CMQ implements this feature based on the Raft algorithm which is simple and easy to maintain, while RabbitMQ uses its proprietary Guaranteed Multicast (GM) algorithm which is difficult to learn.

In GM, all nodes in the cluster are organized as a ring. A log replication request will be sent to subsequent nodes one by one after the leader. The leader will send an ACK message to the ring after it receives the request again. Only after the ACK is received by the leader again can the log be fully synced among all nodes in the ring. 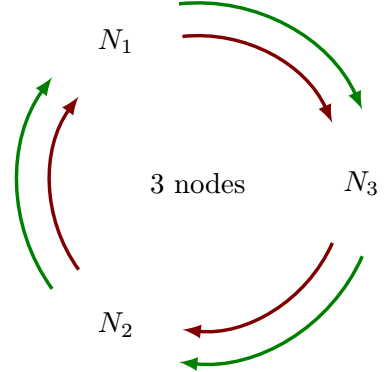 The GM algorithm requires that success be returned only after logs have been synced among all nodes in the cluster, while the Raft algorithm requires sync only among most nodes, which reduces the waiting time in sync route by almost a half.

Performance comparison between CMQ and RabbitMQ

The testing scenario is as follows: three servers with the same configuration form a cluster, CMQ and RabbitMQ are both configured as image queues, and all data is synced on the three servers. CMQ and RabbitMQ both have the produced and consumed message ACK mechanisms enabled, and the size of produced messages is about 1 KB each.

The testing data is as follows:

In high-reliability scenarios, the throughput of CMQ is four times higher than that of RabbitMQ.