For duplicate messages, the best solution is to make them reentrant (repeated message consumption has no impact on the business). If this is not possible, deduplication needs to be performed on the consumer side.

Messages may be lost due to network exceptions, server failures, or other issues. To prevent message loss and ensure reliable delivery, CMQ adopts a mechanism of dual acknowledgment mechanism for message production and consumption.

As the message acknowledgment mechanism of CMQ guarantees at-least-once delivery of every message, repeated production/consumption may occur due to network jitters or producer/consumer exceptions.

If there is only one consumer, you can cache the consumed deduplication keys (e.g., KV) and check whether they have already been consumed during each consumption. The key cache can be set to expire based on the maximum validity period of messages. CMQ provides a parameter for the current minimum unconsumed message time (min_msg_time) in the queue. You can use this parameter and the maximum retry period for message production to determine the cache expiration time.
If there are multiple consumers, distributed caching of deduplication keys should be used.

CMQ supports a maximum message validity period of 15 days. You can adjust the validity period within the value range as needed.
The minimum unconsumed message time in the current CMQ queue is the earliest time point as shown in the figure below. All the messages before this time point have already been deleted, while those after it may have not. 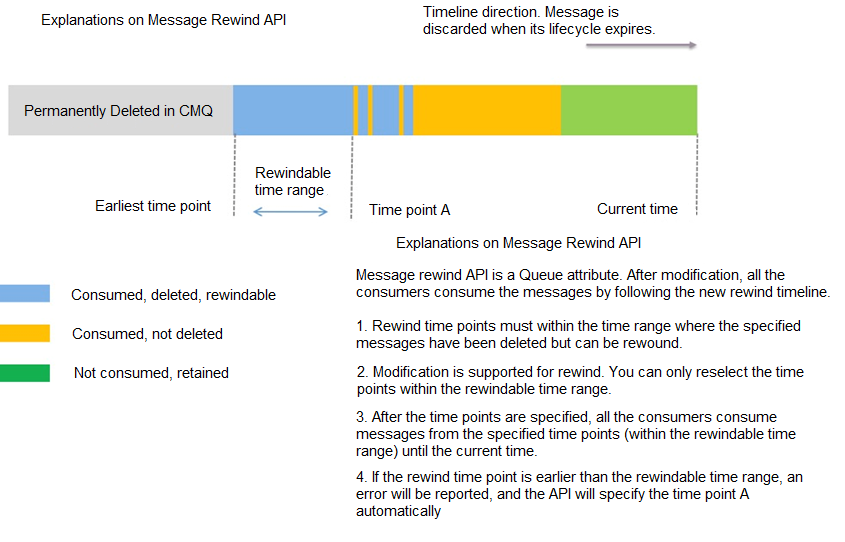 How to avoid duplicate commits:

How to prevent multiple messages with the same body from being filtered out: