To implement refined control over app features, IM provides you with powerful callbacks free of charge. These callbacks use the persistent connection mode by default. A callback is a request sent by the IM backend to the app backend server before or after an event occurs. This allows the app backend to synchronize data if necessary or intervene in the subsequent event processing. For more information on the callbacks currently supported by IM, see the Callback Command List. 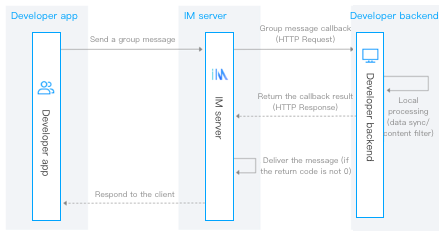 Callbacks can be classified into four types according to their functions:

Callbacks can be classified into two types by process:

The specific callback content is included in the HTTP request packet. For details, see the following callback examples.

To ensure a high callback success rate, third-party apps need to process callbacks quickly. For example, the app can send a callback response and then process the specific business logic.

To obtain a certificate issued by IM free of charge, you need to log in to the console, configure the callback URL, and download the certificate. For more information, see Callback Configuration.

The first type of callback has the lowest security level, and the last type has the highest.

We strongly recommend that apps use the third type of callbacks. In addition, the certificate issued by IM is completely free of charge.

Currently, the IM console allows you to configure callbacks, including configuring the callback URL and the types of enabled callbacks. For details on the configuration method, see the Configuration of Third-Party Callbacks.

The IM console allows you to configure only HTTP and HTTPS callbacks. If you need to enable the HTTPS mutual authentication callback, which has the highest security level, complete the following steps:

If a callback failure occurs, check whether the configured callback service has a problem according to the following checklist: