Removing and Re-adding Nodes from and to Cluster

Many TKE operations, such as Kubernetes update or kernel upgrade, you need to remove nodes from a cluster and add them back. This article describes the process in detail, which can be divided into the following steps:

The draining process involves deleting and then recreating Pods, which may affect services in the cluster. Therefore, it is recommended that you perform the following checks before draining Pods:

Currently, kubelet’s image pull policy is serial. If a large number of Pods is scheduled to the same node in a short period of time, the Pod launch time may be longer.

Currently, there are two ways to complete drainage for TKE clusters:

When the Pods running on a node are drained, this node is cordoned. 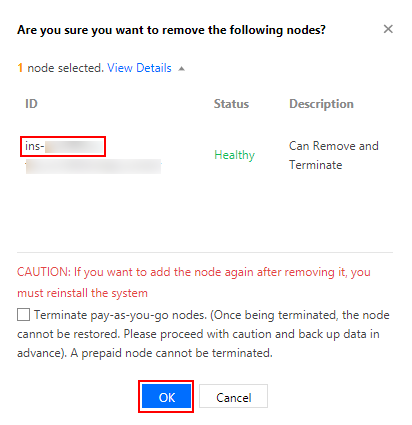 Step 3: add the node back to the cluster

After the node is added successfully, it is still cordoned.

To streamline node maintenance operations, Kubernetes introduced the drain command. The use principles are as follows:

For versions after Kubernetes 1.4, the drain operation is to first cordon the node and then delete all the Pods on the node. If this Pod is managed by a controller such as Deployment, the controller will re-construct the Pod when it detects that the number of Pod replicas has decreased, and will schedule them to other nodes that meet the conditions. If this Pod is a bare Pod that is not managed by a controller, it will not be re-constructed after it is drained.

This process involves first deleting, and then re-creation, and is not a rolling update. Therefore, in the update process, some requests for drained services may fail. If all the related Pods of the drained service are on the drained node, the service may become completely unavailable.

To avoid this situation, Kubernetes versions 1.4 and later introduced PodDisruptionBudget (PDB). You only need to select a business (a group of Pods) in the PDB policy file, to declare the minimum number of replicas that this business can tolerate. Now when you execute the drain operation, the Pod is no longer deleted directly, but instead whether it meets the PDB policy is checked through evict api. The Pods will only be deleted if the PDB policy is satisfied, protecting business availability. Note that the impact of the drain operation on businesses can only be controlled if PDB is correctly configured.

Through this step, you can mount the data disk without formatting it.