When you use TKE, CLB loopback may occur, causing service inaccessibility or several seconds of latency during access to an Ingress. This document describes the symptoms, causes, and solutions of this problem.

CLB loopback may cause the following symptoms:

The root cause is that when CLB forwards a request to the real server, the packet source and target IPs are both on the same node, but Linux will ignore the received packets whose source IP is the local IP by default, causing the data packet to be looped within the CVM instance as shown below:

As shown above, when the node whose traffic is forwarded is the node of the client that sends the request:

The most frequent fault of access to an Ingress in the cluster is a latency of several seconds. It is because if a layer-7 CLB instance's request to a real server times out (in about 4 seconds), the instance will try the next real server. Therefore, if you set a long timeout period on the client, loopback may occur with a symptom of slow request response with a several-second latency. If your cluster has only one node, CLB has no real server for retry, and the symptom will be inaccessibility.

If you use a LoadBalancer-type private network Service to expose your service, a private network CLB instance and the corresponding layer-4 listener (TCP/UDP) will be created. If a Pod in your cluster accesses the EXTERNAL-IP (i.e., CLB IP) of the LoadBalancer-type Service, the native Kubernetes will not actually access the LB but will directly forward the traffic to the backend Pod through iptables or IPVS without passing CLB as shown below: 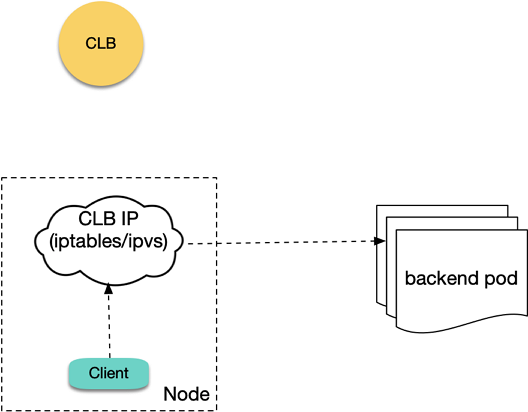 Therefore, the native Kubernetes logic has no loopback errors. However, in IPVS mode of TKE, the access request packet of a client to a CLB IP will be actually sent to CLB. Loopback will occur when a Pod accesses the CLB IP of a LoadBalancer-type Service in the same cluster in IPVS mode, which is similar to the aforementioned private network Ingress loopback error as shown below:

The differences lie in that when loopback occurs, the layer-4 CLB instance will not try the next real server, and the symptom is usually unstable connection. If the cluster has only one node, complete inaccessibility will be caused.

Why doesn't the IPVS mode of TKE use the similar forwarding logic of the native Kubernetes (i.e., the traffic is directly forwarded to the backend Pod without passing the LB)?

In the legacy TKE IPVS mode, the cluster uses a private network LoadBalancer Service to expose your service, and the health checks performed by the private network CLB on the backend NodePort will all fail. Below are the causes:

To solve the aforementioned problems, the solution of TKE is not to bind EXTERNAL-IP to kube-ipvs0 in IPVS mode; that is, packets of a cluster Pod's access requests to the CLB IP will not enter the INPUT chain; instead, they will be directly sent by the node NIC to CLB actually. In this way, the health check packets will not be discarded as packets with the local server IP when entering the node, and the health check response packets will not enter in the INPUT chain and then get looped within it.

Although this method fixes the problem of CLB health check failure, it also makes cluster Pods' access request packets to CLB actually arrive at CLB. As the service in the cluster is accessed, the packets will be forwarded back to a cluster node, which also may cause loopback.

The problem has been submitted to the community, but there is still no solution.

Why public network CLB does not have loopback?

Does CLB have any mechanism to avoid loopback?

Can anti-affinity deployment of the client and server avoid loopback?

If you deploy a client and a server through anti-affinity so that they are not on the same node, can CLB loopback be avoided?

By default, LB is bound to a real server through a node NodePort, and a request may be forwarded to NodePort of any node. In this case, no matter whether the client and server are on the same node, loopback may occur. However, if externalTrafficPolicy: Local is set for the Service, LB will forward them to only the node with a Server Pod. If the client and server are scheduled to different nodes through anti-affinity, no loopback will occur. Therefore, anti-affinity and externalTrafficPolicy: Local can avoid the loopback issue (including private network Ingress and private network LoadBalancer Service).

Does the direct LB-Pod connection of VPC-CNI have the CLB loopback issue?

TKE generally uses the Global Router network mode, and another mode is VPC-CNI (elastic network interface). Currently, direct LB-Pod connection supports only the Pods of VPC-CNI; that is, LB is directly bound to the backend Pod rather than NodePort as the real server as shown below: 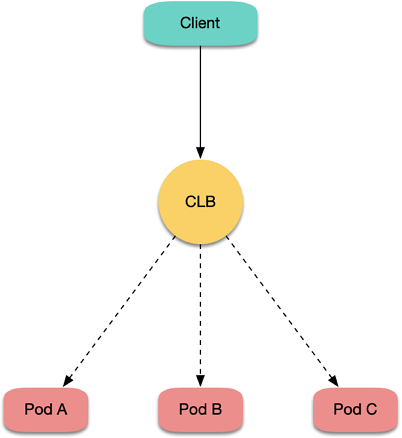 In this case, requests can bypass the NodePort instead of possibly being forwarded to any node like before. However, if the client and server are on the same node, loopback may still occur, which can be avoided through anti-affinity.

Are there any suggestions?

The anti-affinity and externalTrafficPolicy: Local methods are not very graceful. Generally, you should avoid accessing the CLB instance in the cluster for a service in the cluster, as the service is already in the cluster, and forwarding through CLB not only lengthens the network linkage but also may cause loopback.

When you access a service in the cluster, use the service name such as server.prod.svc.cluster.local as much as possible. In this way, requests will not pass CLB, and loopback will not be caused.

If your business has a coupled domain name and cannot use a Service name, you can use the rewrite plugin of coreDNS to point the domain name to a Service in the cluster. Below is the sample coreDNS configuration:

If multiple Services share the same domain name, you can deploy an Ingress Controller (such as nginx-ingress) by yourself: