If stutters occur when you access a CVM from a local server or access other network resources from a CVM, and packet loss or high latency is found after you ping, this is probably caused by backbone linkage congestion, linkage node failure, excessive server load or inappropriate system configuration. You can use MTR to further diagnose after ruling out CVM problems.
MTR is a powerful network diagnostic tool, providing reports that allow users to find out the causes of network problems. This document describes how to use MTR and analyze report results in Linux and Windows.
In this document, the server on which MTR runs is referred to as the source server, and the server to be queried is referred to as the destination server. See relevant sections based on the operating system of your source server.

WinMTR Introduction and Instructions (for Windows)

WinMTR is a free network diagnostic tool for Windows integrated with Ping and tracert features. Through its graphical interface, you can see the response time and packet loss of each node intuitively.

Installation and use of WinMTR

MTR Introduction and Instructions (for Linux)

MTR is a network diagnostic tool for Linux integrated with Ping, traceroute and nslookup features. ICMP packets are used to test the network connection between two nodes by default.

Almost all released versions of Linux are preinstalled with MTR. You can also install MTR using the following command:

-h/--help: Displays help menu.
-v/--version: Displays MTR version information.
-r/--report: Outputs the result in a report.
-p/--split: Different from ** --report, **-p/--split lists the result of each trace separately.
-c/--report-cycles: Sets the number of data packets sent per second. Default is 10.
-s/--psize: Sets the size of each data packet.
-n/--no-dns: Disables the domain name resolution for IP addresses.
-a/--address: Sets the IP address from which data packets are sent. It is mainly used for scenarios with a single server and multiple IP addresses.
-4: IPv4.
-6: IPv6.

We take the following MTR report from a local server to a CVM (119.28.98.39) as an example to explain the returned results. 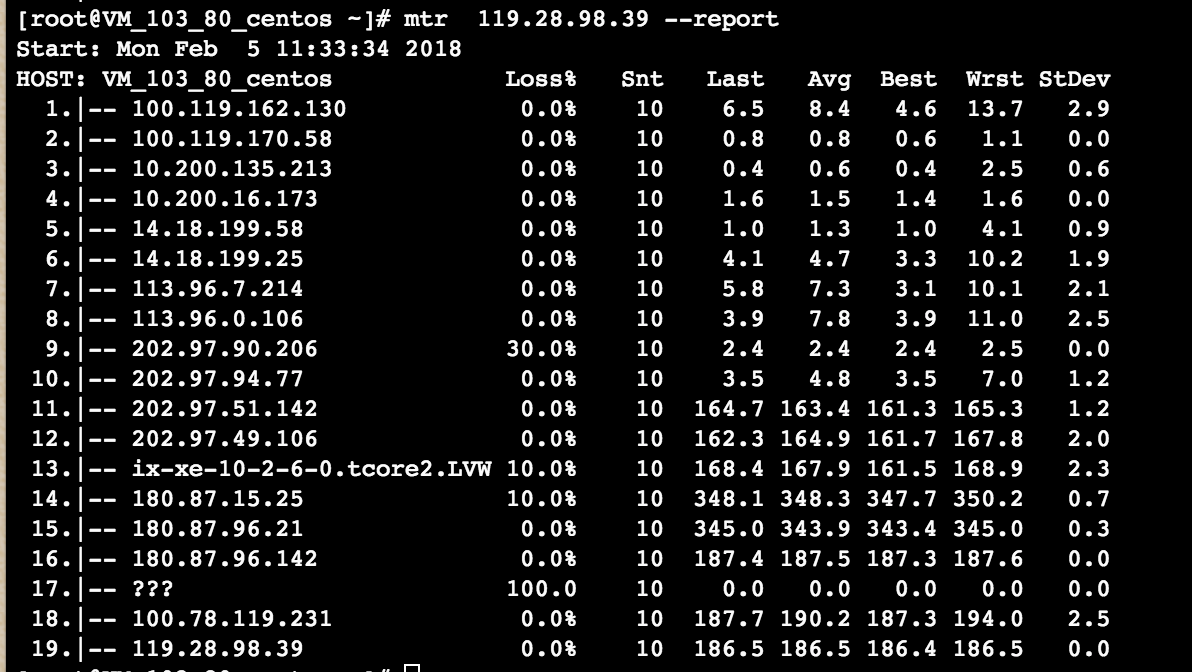 We have introduced how to use network diagnostic tools in different operating systems. Next, we will describe how to analyze a report.
Due to the asymmetry of network conditions, if any network error between the local server and the CVM occurs, it is recommended that you collect two-way MTR data (both from the local server to the CVM and from the CVM to the local server).