By enabling versioning, you can store multiple versions of an object in the same bucket. For example, you can store multiple objects with the same object key “picture.jpg” in one bucket, but the objects have different version IDs such as 100000, 100101, and 120002. You can query, delete, or restore the objects by version ID. Versioning enables you to recover from data loss caused by accidental deletion or application failure. Versioning is ideal for the following scenarios:

There are three versioning states for a bucket: not enabled, enabled, or suspended.

Managing Objects in a Versioning-enabled Bucket

For objects in the bucket before versioning is enabled, their version ID will be “null”. Enabling versioning will change the way COS handles the objects, such as how COS makes requests, but not the objects themselves. Objects with the same name uploaded thereafter will be stored in the same bucket with different version IDs. You can manage objects in a bucket with versioning enabled as described below:

COS stores object version information in the versions parameter associated with the bucket and returns object versions in the order of storage time from the newest to the oldest.

Querying all versions of a specific object

You can query all versions of a particular object using the versions parameter together with the prefix request parameter. For more information on prefix, see GET Bucket Object Versions.
Below is a sample request for getting all versions of a specific object: 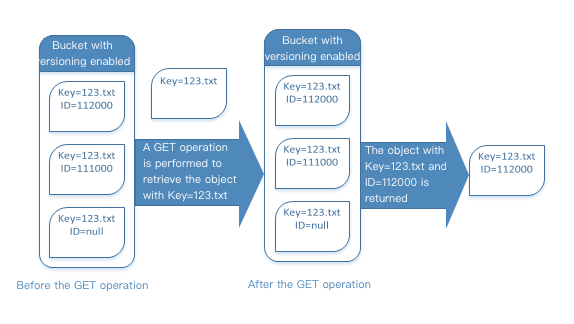 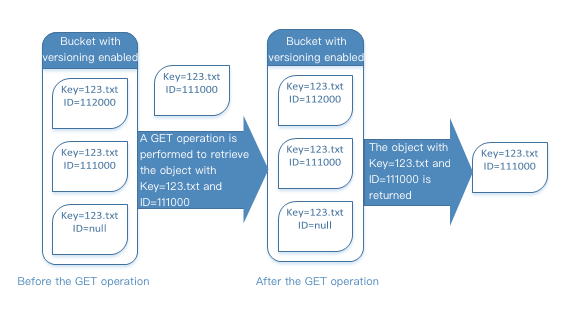 Querying the metadata of an object version

You can delete unnecessary object versions whenever you want. When you make a DELETE request in a versioning-enabled bucket, there will be two scenarios:

Versioning can be used to restore previous versions. You can do it in two ways:

Managing objects in a versioning-suspended bucket

When you suspend versioning, existing objects in your bucket do not change. What changes is how COS handles objects in future requests. The section below describes how to manage objects in a bucket where versioning is suspended.

Once you suspend bucket versioning, when you use PUT, POST, or COPY operations, COS will automatically add a “null” version ID to objects added to the bucket thereafter as shown below:

If there are versioned objects in the bucket, the objects newly uploaded to the bucket will become the current version with a version ID of null as shown below: 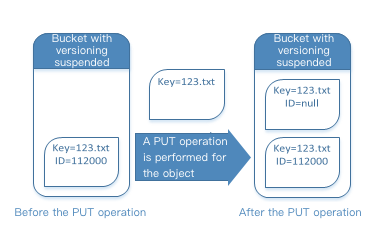 If there is already a null version in the bucket, it will be overwritten, and the original object content will also be replaced accordingly as shown below: 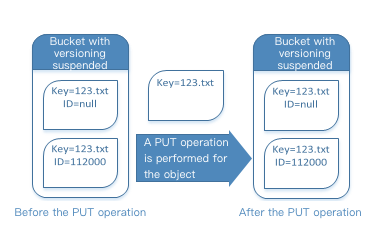 A GET Object request in a versioning-suspended bucket returns the current version of an object.

If versioning is suspended, a DELETE request will result in one of the following: